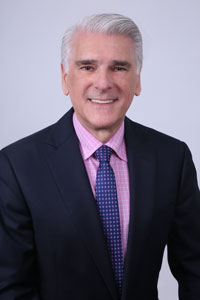 Greg is a Phi Beta Kappa graduate of the University of California at Berkeley, from which he received an A.B. degree with Highest Honors in 1976. Greg received a J.D. degree from UC Berkeley’s School of Law in 1979, where he was on the Editorial Board of the California Law Review.

Greg provides mediation and arbitration services through Signature Resolution. Greg is a Past Chair of the California State Bar Standing Committee on Alternative Dispute Resolution. He is a Distinguished Fellow of the International Academy of Mediators, a Fellow of the Chartered Institute of Arbitrators, a member of the Arbitration and Mediation Panels of the CPR Panel of Distinguished Neutrals (Los Angeles, Entertainment and Employment Panels), the California and National Academies of Distinguished Neutrals, the World Intellectual Property Organization (WIPO), headquartered in Geneva, Switzerland, and an Arbitrator available through the London Court of International Arbitration (LCIA), the American Arbitration Association (AAA), and Past Member of the Independent Film and Television Alliance (IFTA). He is a member of the dispute resolution sections of the Beverly Hills, Los Angeles County and American Bar Associations, the Copyright Society of the United States, Los Angeles Copyright Society, the Los Angeles Intellectual Property Association, the Sports Lawyers Association, the Federal Bar Association, and the International Chamber of Commerce (ICC).

Mediation Experience: Greg brings more than 40 years in the legal industry to his practice at as a mediator and arbitrator. For nearly 20 years, he has successfully assisted parties in resolving more than a thousand complex matters. He is often called upon to resolve disputes after previous attempts have failed. Parties consistently attribute their successful resolutions to Greg’s persistence, attentive and open facilitation of a process designed to encourage creative solutions, and his broad substantive knowledge and experience. Greg has successfully resolved matters in a broad range of fields including contract, fraud, entertainment, intellectual property (copyright, trademark, idea submission), trade secret, right of publicity, unfair business practices, employment, class actions, partnership, real estate and legal malpractice.

In addition to being invited to join the select dispute resolution societies referenced above, Greg was named as a “Power Mediator” by The Hollywood Reporter in its list of the mediators to whom the entertainment community turns to resolve its disputes. He is listed in Best Lawyers in America, Best Lawyers in Los Angeles for Mediation (2021) and each year since 2006 has been recognized as a Southern California SuperLawyer™ in the field of Alternative Dispute Resolution. Based upon the review of his peers, Greg has achieved an AV rating from the Martindale Hubbell Law Directory. Greg is admitted to practice before all state and federal courts in California, the United States Courts of Appeals for the Ninth and Federal Circuits, and the United States Supreme Court.

In 1979, Greg joined the law firm of Dern, Mason, Swerdlow and Floum, where he practiced for ten years, becoming the Managing Partner of the firm’s litigation department. Upon the dissolution of Dern, Mason in 1989, Greg became a founding member of Del, Rubel, Shaw, Mason & Derin (now Del, Shaw, Moonves, Tanaka, Finkelstein & Lezcano), where he remained until opening his own office in 1997. He is experienced in all phases of litigation and has handled matters before federal and state trial or appellate courts in California, New York, Illinois, Pennsylvania and other jurisdictions. He has appeared before the California Labor Commissioner, the tribunals of the Screen Actors Guild, American Federation of Television and Radio Artists, Directors Guild of America, Writers Guild of America, Major League Baseball Players Association, California Regional Water Quality Control Board, California State Water Resources Control Board and the National Association of Securities Dealers.

Greg has litigated matters in diverse substantive areas, concentrating on entertainment and intellectual property, breach of contract, real estate, labor and employment, corporate and partnership, business torts, product liability and general business disputes. He serves as principal outside litigation counsel to a major talent agency, was lead local counsel in Southern California to a Fortune 500 company in connection with a series of product liability matters involving a medical device, and has tried cases as varied as a class action concerning a real estate development, a multi-million dollar construction defect matter, and talent agency disputes.

Greg is a Past President of the Pacific Southwest Region of The United Synagogue of Conservative Judaism (USCJ). Greg also served on the International Board of USCJ, as well as the Advisory Board of the Zeigler School of Rabbic Studies and as Chairman of the Board of Directors of one of the largest synagogues in the western United States. Greg has served as a volunteer Big Brother and as a long time successful Little League Baseball and AYSO Soccer coach. A founding member of the West Los Angeles Cal Alumni Club, Greg has served as Vice President and a member of the Board of Directors of the (U.C. Berkeley) California Alumni Association. As Chairman of the Pro Bono Committee of the International Academy of Mediators, Greg works to assist parties engaged in pro bono litigation by arranging for the pro bono mediation services of some of the premier mediators in the world.